In September 2017, teams of servicemen and servicewomen from an array of countries converged on Toronto to proudly don their nation’s colours. While officially there were 17 nations in attendance at Invictus Games Toronto, there was another team, more than 1,600 strong, proudly donning their own yellow uniform.

The Invictus Games volunteer army was out in force.

I arrived at the Games with much anticipation as I had never been to Toronto and I didn’t know any of my fellow volunteers. I felt a mixture of nerves and excitement when I collected my accreditation and as soon as I walked through the doors of the competitors’ village I got my first taste of the contagious Invictus spirit that I had heard so much about. I was hooked on the Games’ atmosphere immediately.

I was a member of the Games Services Crew stationed at the competitors’ village. Our team had a variety of responsibilities, from checking-in competitors to taking them, along with their family and friends, on an incredible trip to Niagara Falls. It was a dynamic, hands-on position that gave me the opportunity to spend a lot of time getting to know the competitors and their families, a privilege that I know meant a lot to the volunteers. 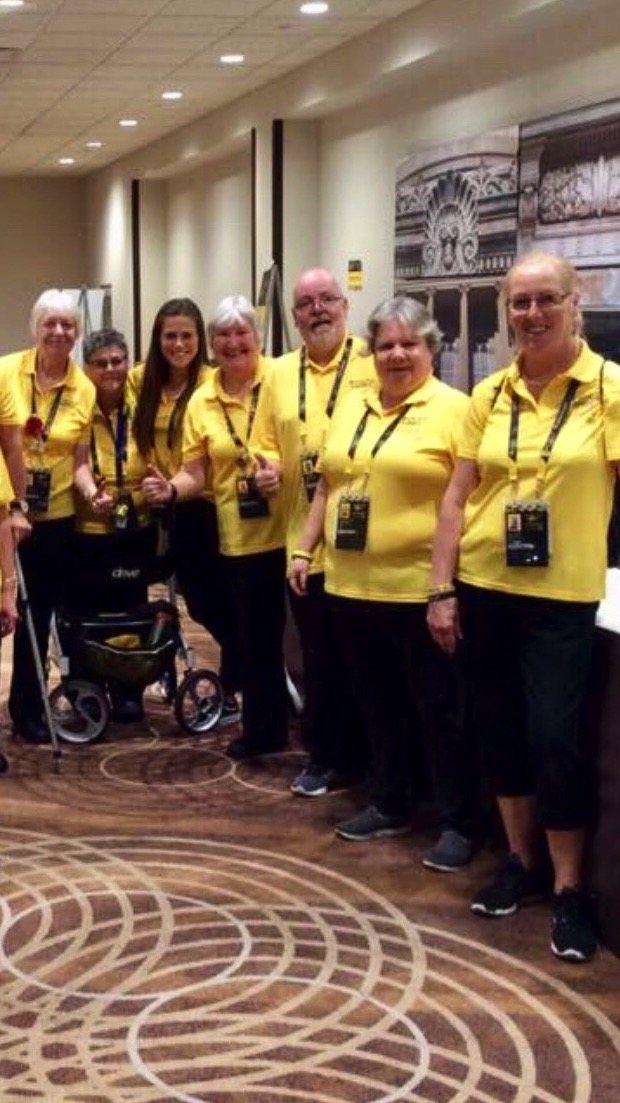 I walked away from the Games with new friends and an entirely new perspective on how powerful initiatives like The Invictus Games can be, not only for our wounded warriors, but for the entire community.

Many of my highlights from the Games took place in the competitors’ village, proving the magic of the Invictus Games is not just apparent in the competition arena. One of my fellow volunteers and ex-Canadian servicewoman Shirley, was a particularly popular personality in the village. Shirley, like many of the competitors had a hardworking but also adorable service dog named Snoopy. Many of the competitors loved having Snoopy around. One Italian competitor even threatened to dognap Snoopy and keep her in the basket of his wheelchair!

Another of my highlights was seeing Australian competitor Michaela Gilewicz caught on camera having an emotional moment while proudly marching in the opening ceremony. Later that week and before her powerlifting competition, Michaela received a tap on the shoulder from Prince Harry who told her he’d seen her get emotional during the ceremony and that she almost made him lose it too!

Of course it is impossible not to mention the incredible athletic feats of the Games. From the inspiring Mark Ormrod receiving a well-deserved medal in the indoor rowing, to Georgia winning gold in the sitting volleyball. Everyone in the stands were in awe of the talent and dedication demonstrated by the Invictus competitors.

For me, a particularly powerful moment happened at the athletics during the 1,500 metres for visually impaired competitors. Three members of Team USA were neck and neck as they approached the final straight, but one competitor fell behind with less than 200 metres to go. Suddenly the competitors’ guides helped all three men band together and run the last 100 metres share the victory.

Being part of the Invictus Games volunteer army was one of the most memorable experiences of my life. I walked away from the Games with new friends, an abundance of new knowledge about adaptive sport and an entirely new perspective on how powerful initiatives like The Invictus Games can be, not only for our wounded warriors, but for the entire community. I am excited to welcome the Games to Sydney in 2018 and after seeing (and hearing) the Australian team all week in Toronto I know that our Games will be a wonderful experience for all.

Game On Down Under! See you in Sydney.